On Friday I was in a particularly good mood (it’s not official yet but on Thursday my supervisor offered me a consultant job at UNESCO for the summer!) and as a result I felt even more grateful than usual for all the experiences and people that have come into my life since I arrived in Paris almost two years ago.

Friday was also Danlu’s last day as an intern at the Organization for Economic Co-operation and Development (she was recently offered a job in Beijing!) and our plan was to go to the “Artsy Hour” at the Fondation Louis Vuitton that evening to celebrate. So around 6:30 p.m. I swung by the OECD, which is located in a very posh neighborhood in 16th, to pick her up and found that our friends Kwame and Alex were there to say hello as well! Everyone looked so snazzy that I decided we had to do a bilateral, international organization photo shoot:

Afterwards we walked for 20 minutes through the Bois de Bologne to reach the Fondation Louis Vuitton, which is a fairly new contemporary art museum designed by Frank Gehry. 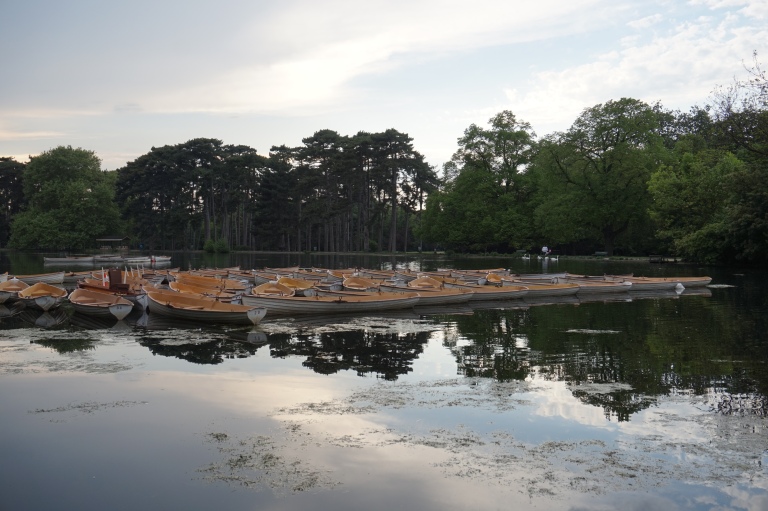 Although I do volunteer at the Mona Bismarck American Center, which attracts a pretty upscale crowd, I still wasn’t so sure that I was cool enough for “Artsy Hour” – which promised cocktails, a DJ, and some sort of light show. But honestly it was so much fun! I am now a total convert to the bourgeois-bohemian lifestyle! (“Bobos” are a uniquely French type of hipster haha).

We decided to go all-out; not only did we use the coat check, we ordered the 6 euro dim sum (which we later found out consisted of only two dumplings ahaha!) and 8 euro cocktails (mine was an Aperol spritz – so Aperol, champagne, and an orange slice – and Danlu had an orange cocktail with tea in it!) Then we hung out by the DJ, drank, and nicely critiqued everyone’s outfits. 😛 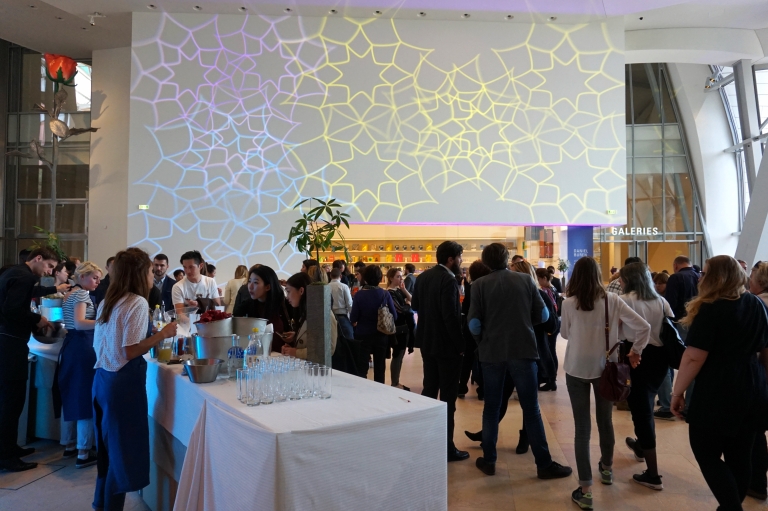 Definitely feeling the alcohol due to a lack of food, we then made our way up to the roof of the museum, which has been made even more beautiful thanks to the colorful glazing designed by French artist Daniel Buren (who seems to have built his entire career on adding colorful stripes and squares to things, which is not a bad way to make a living!) The views of La Defense were excellent as well! 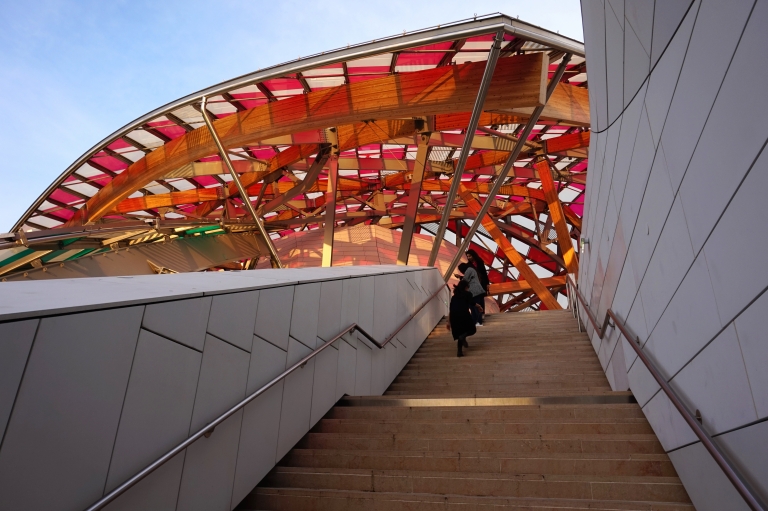 Although the roof took up most of time and attention, inside the museum was showcasing an interesting group of works by contemporary Chinese artists. Giant Buddhas seemed to be a distinct theme and there were two video installations that I particularly liked. The last one, “Ten Thousand Waves”, which told the story of the drowning of 25 Chinese fishermen off the cost of the UK in the 1980s (mixed in with some calligraphy, Chinese mythology, and a recreation of 1920s Shanghai), was projected on 7 different screens which showed different aspects of the story, and were positioned in such a way that you couldn’t watch all of them at the same time. I liked that as viewers we weren’t totally omniscient; we constantly missed out on important details because we couldn’t see what was happening from every angle and perspective. Just like real life I suppose! 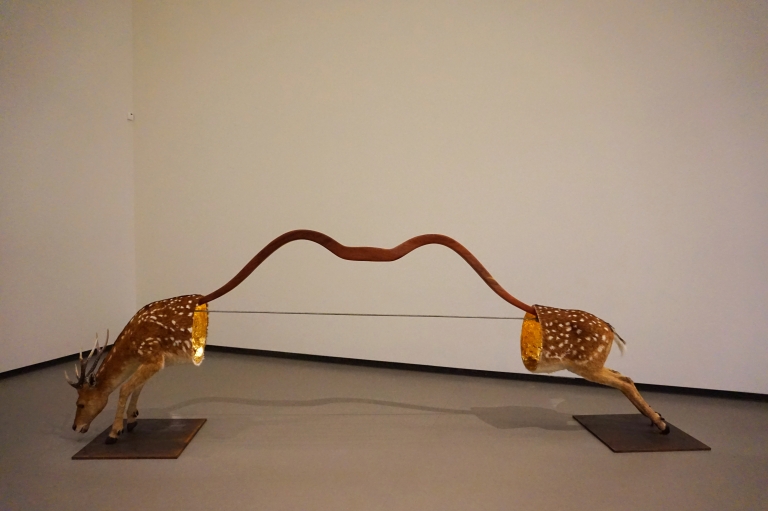 We ended our “Artsy Hour” experience by watching the sunset, spending way too long in the gift shop, making it to dinner just before one of our favorite restaurants closed at 11 p.m., and buying some boba/bubble tea at a place Danlu thinks is a front for some sort of illegal business (but the boba was decent so oh well!) It was such a fun day, I think we can safely say that Friday the 13th is not so unlucky after all. 🙂 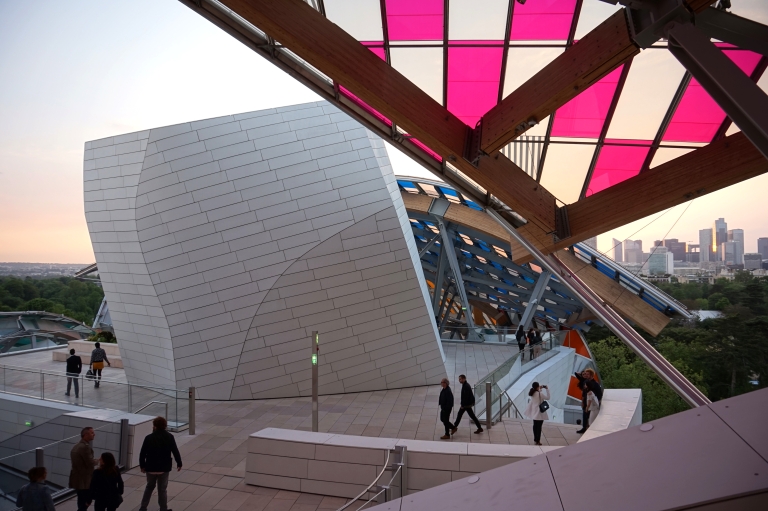 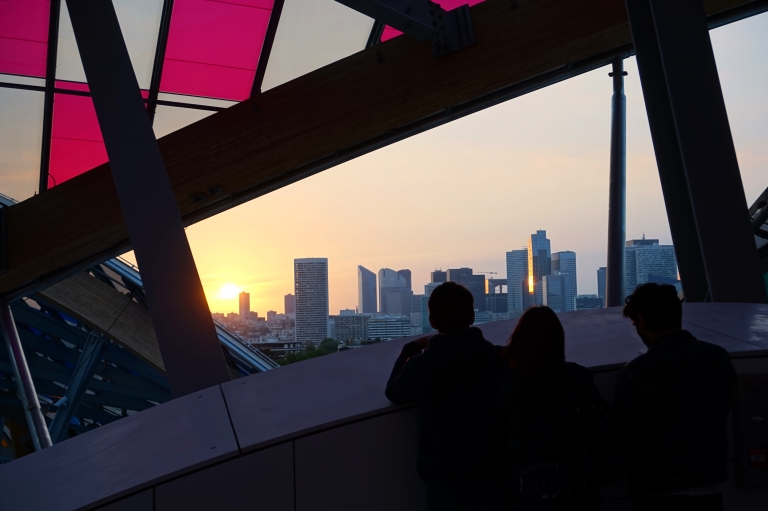